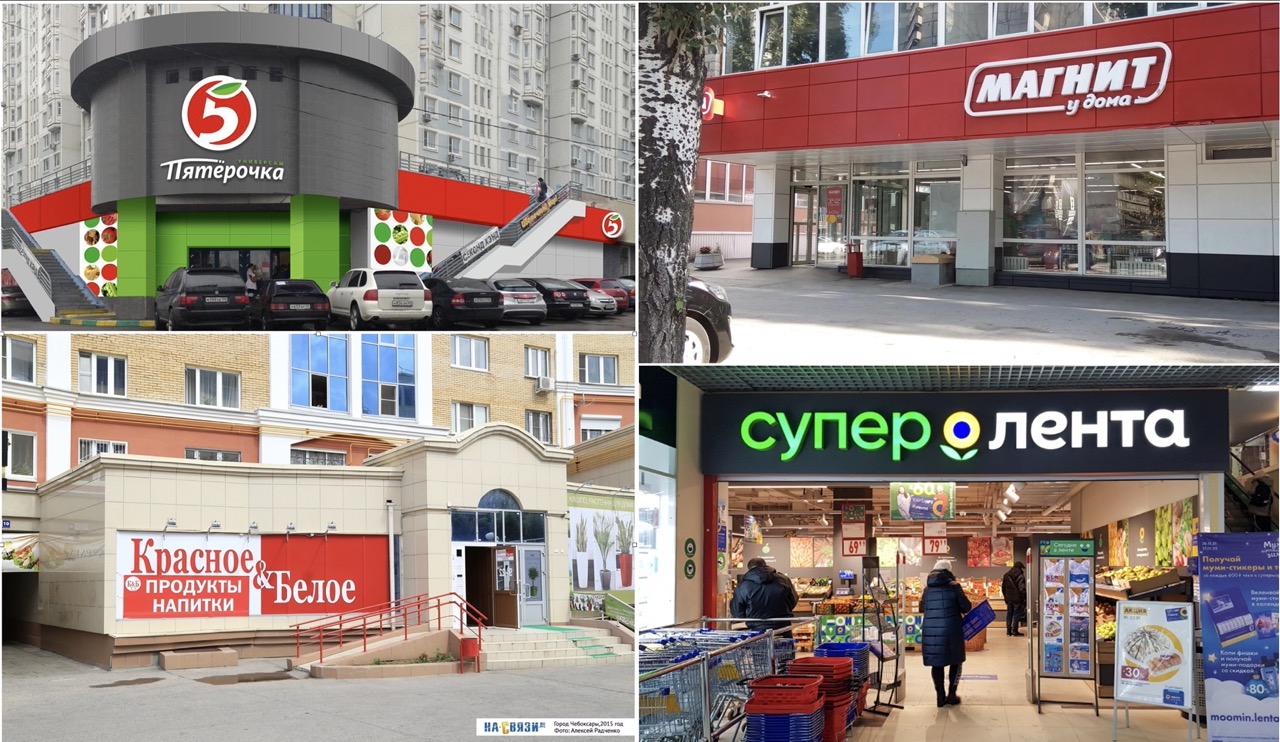 Good day, Dear Readers, Fans, and Enemies. Today let us give an account of Russian retail performance. Despite the traditional view on the economies under siege, today it is evolving differently. Events we are used for evaluating a good turn out to be harmful, and painful. None of the single approaches of ordinary estimation can be applied today to get the actual picture.

Since the beginning of the well-known clash aiming at Russian economic suppression, none of the actual signs of the economy and retail market problems have been identified. We can say that some issues are fuelled more by artificially grown human fears than by real economic reasons. Generally, all of today’s military movements were planned to redistribute European “excessive” assets under the mist of “anti-Russia”. The sad thing is our European friends do not understand it. This understanding is the key factor for building any forecast about the Russian market.

“Big Six” retail players – X5, Magnit, Lenta, Red & White, Auchan, and Metro CC report double-digit turnover growth. Since Russian Rouble became richer, around 60 rub/usd, and Euro met a Dollar-ish level, official results of retailers look even better in foreign currencies. By the way, this comprises another piece of evidence for the above-mentioned story is about Europe, not Russia. The energetic income surplus allows the government to feel more comfortable in the social area, building a stable non-fear base for citizens. The fewer the fears and threats – the more the purchasing activity inside the market. Uneducated and non-patriotic citizens who experienced mind failures in perceiving the situation have left the country. So, welcome them abroad accordingly. Of course, some businesses suffered from European divorce – machinery, automobiles, technical spare parts, and some software. The retail market always keeps benefits from retardation in other industry branches. That was the same in 2008 – the so-called first wave of world crisis, and in 2014 – the year of Krym returned home. So, how exactly are Big Retailers moving forward?

X5 Retail Group – the current evading leader chased by its close competitor shows signs of internal stagnation. There are numerous thoughts regarding this company is not any more managed by Mikhail Freedman. The X5 has only one hope and locomotive – “Pyaterochka” has ceded its turnover growth ratio to Magnit this august. All market is waiting for a complete leader swap by the result of the year 2022. X5 is experiencing poor labor management, lack of future development concepts, and uncontrolled spreading of the security department among other functions. Online delivery integration with ordinary shopping has failed and was sold to Sberbank (German Grief’s eco-system). The last stand for X5 is a newly resurrected concept of discounter named “Pussy Siskin” (“Чижик”/ “Chizhik”) which is based on the price slaving to promo prices of “Pyaterochka”, thus, putting a high risk for an uncontrolled promo-share ride. Generally, X5 retail group is built as a pure Russian company where the security department represents the basement of a structural pyramid. If not properly controlled, it contaminates all other vital commercial functions leading to profit reduction in hard-to-control points. All major top managers are occupying their chairs for more than 8 years. That is why our current forecast for this company is neutral-negative.

Magnit has received a mighty injection of international management via Jan Dunning – its current general director. We would say the best portion of the international management school. The company made its main prop on the careful management selection, internal procedures fixing, and smart handling of the security department. There are not any loudly proclaimed projects, just ordinary day-to-day perseverance. And we see positive results in the numbers of market gain. Magnit is progressively growing, and showing investors, suppliers, and partners a welcome message to join. The company is located in Krasnodar – the last stronghold for the opposing oligarch Sergey Galitsky (Arutunyan) the ex-president of Magnit. The regional basement is considered the only shortage for further development in resources and communications. However, becoming a new market leader in 2023 will annihilate this deficiency and convert it into the old prejudice. After Magnit was purchased by the state bank VTB, all assets have been transferred to Alexander Vinokurov and its company Marathon. There are certain opinions that Marathon Group will be a future holder of Magnit+X5 joint monster. This merge is very logical on a layer of country food security and state price control considering the current political situation. Dixi company is successfully swallowed by Magnit, releasing an empty cell inside the TOP5 rank.

Lenta continues a soft pace towards the supermarket format with its newly developed brand Super-Lenta aiming for a smaller, closer, and tighter offers to customers. Looking good, fresh, and newish, though with some problems to be fixed in product replenishment, merchandising, and in-store operation. Russian customers a fed up with Hypermarkets and corresponding distant trips. Hypermarkets have purely lost the assortment differentiation being busy with private label and first-price games. The competence to choose the right direct import assortment is also lost. The example of the deceased Karusel Hypermarkets (ex-part of X5) demonstrates this. Super-Lenta is going into the clash with stagnating Perekrestok (also part of X5) with quite a good chance to win. Recently Perekrestok got a new general director from Pobeda aircraft company which will underline the long and painful story of the middle format.

Red & White (“Красное и Белое” – KiB) is quickly spreading the number of stores in major cities including Moscow. The company started in the Ural and moved in anti-phase with others – from east to west. Despite the initial specialization in Spirits and Alcohol, the KiB is rapidly expanding its accompanying assortment of ready-to-eat, snacks, sweets, and other grocery stuff. The idea is to enter every city living block with cheap and quick satisfaction, which always worked in Russia.

Auchan and Metro CC are the last struggling hypermarkets. In terms of internal management Auchan is a complete mess but visually looks good. Both fight to replace “leaving the Russia” brands with some parallel import and friendly-country alternatives. Indisputably, Auchan has had the image of the “Folk’s store” for many years. All competitors tried to de-crown Auchan with its image of low prices, but to no avail.

Metro conducts quite a different style with a vanishing European-German kind of “system” approach, which does not work at all. Fresh meat and fish are no anymore a magic contemplation for customers. Being the pioneer in quality expensive brands for reasonable money, Metro CC has completely lost its paradigm and messed itself within an ordinary shop line-up. The Metro sub-format “Olivier” did not get any wide development.

The next members are not the main players but are remarkable with their approach and quick performance. We would like you to know these names.

VkusVill (“ВкусВилл” like a Taste Village) is number one closest to the heels of any major player. The core concept is the so-called industrial private label without bullshitting and faking. Every product is designed from scratch in tight cooperation with producers without artificial and dangerous additives. The first who successfully invented the standing approach to cashiers, nicely and friendly talking, helping to transfer your goods from the boggy into the bag. Yet best in the class fruits, vegetables, and fresh sweet departments on the market (Top-Retail statement) with respect to price, service, and proximity. Now prepare to overcome the scaling effect.

Svetofor (“Светофор” – Traffic lights) is one remarkable organization occupying the obsolete yet shimmering niche of discounters. Slim and lean, sometimes stiff but quirky. Naked pallets layout, first-born warehouses, hangars, and industrial spaces. Bottom prices and nearly bottom quality dancing on the edge of the expiry date. No central purchasing office – just snoopy teenagers with notebooks at home apartments. Suppliers get their money only after the product is sold, portion by portion, sometimes with the last transfer to be stacked. Usually, products are chosen by a long period of negotiations with constant inquiries to “simplify it even more”. Nevertheless, it is working and growing.

Online players – Ozon and Wildberries in total are approaching TOP5, but it is hard to deduct food from the overall turnover. On-liners are the most successful in build-up an alternative route from friendly countries. You can order practically any product with quick delivery. Customer service is improving day by day, and site navigation and additional services appear better and better. Traditional stores will definitely lose customers without advanced differentiation and operational excellence. If they continue to admit an average-shitty store, then the future goes to On-liners. Looking at the traditional players, we have a feeling, that they predominantly speak about new trends than actually mold them up.

Finally, logistics becomes a stand-alone key success factor in the time of total change. Today logistics does not serve the concept, but the concept emerges from logistics. One who does not grasp that will bite the dust very soon. There are two parts to successful logistics in Russia. The first one is to organize a proper route through the friendly territory. For example Turkey, Kazakhstan, Azerbaijan, Iran, China, Korea, Japan, and other sea routes. The second factor is to have a good connection with customs and affiliated “siloviki” (every time hard to explain definition – militia-type men around the business). It is extremely vital to understand Turkey is a NATO country and can lock up in a second. There is a high risk of a military coup there. Azerbaijan is good, but it is too close to Armenia and Turkey. Armenia is very unstable in terms of political situation also. Do not forget about the Iran-Azerbaijan Caspian Sea line. Middle east as Kazakhstan, Uzbekistan, and Turkmenistan are very corrupt countries and is under heavy and constant Pentagon breach trials. China is the most preferable but not yet tested under the hard-times partner. Do not forget that China has not ever been tested in any serious military conflict since WWII. Its capabilities under military and economic pressure are not obvious. South Korea and Japan are quite safe. Their cosmetics, detergents, automobiles, machinery, and electronics are popular and close to the border.

We have to say many European producers understand the situation and try to set up a grey route to Russia via Turkey, Scandinavia, and the Baltics. Business is business, and nobody wants to starve in the name of the British Queen or Sam Daddy. Let them starve on their own.

The future is hanging on the Special Military Operation held near the Russian borders aiming to eliminate Anglo-Saxon interests. We will keep you updated on the general economic and retail status. Do not feel hurt by our patriotic narratives – we are the sons of our country and stand for it, as all of you should.

Involved@top-retail.net – don’t pretend to be Mark if you are Charles.