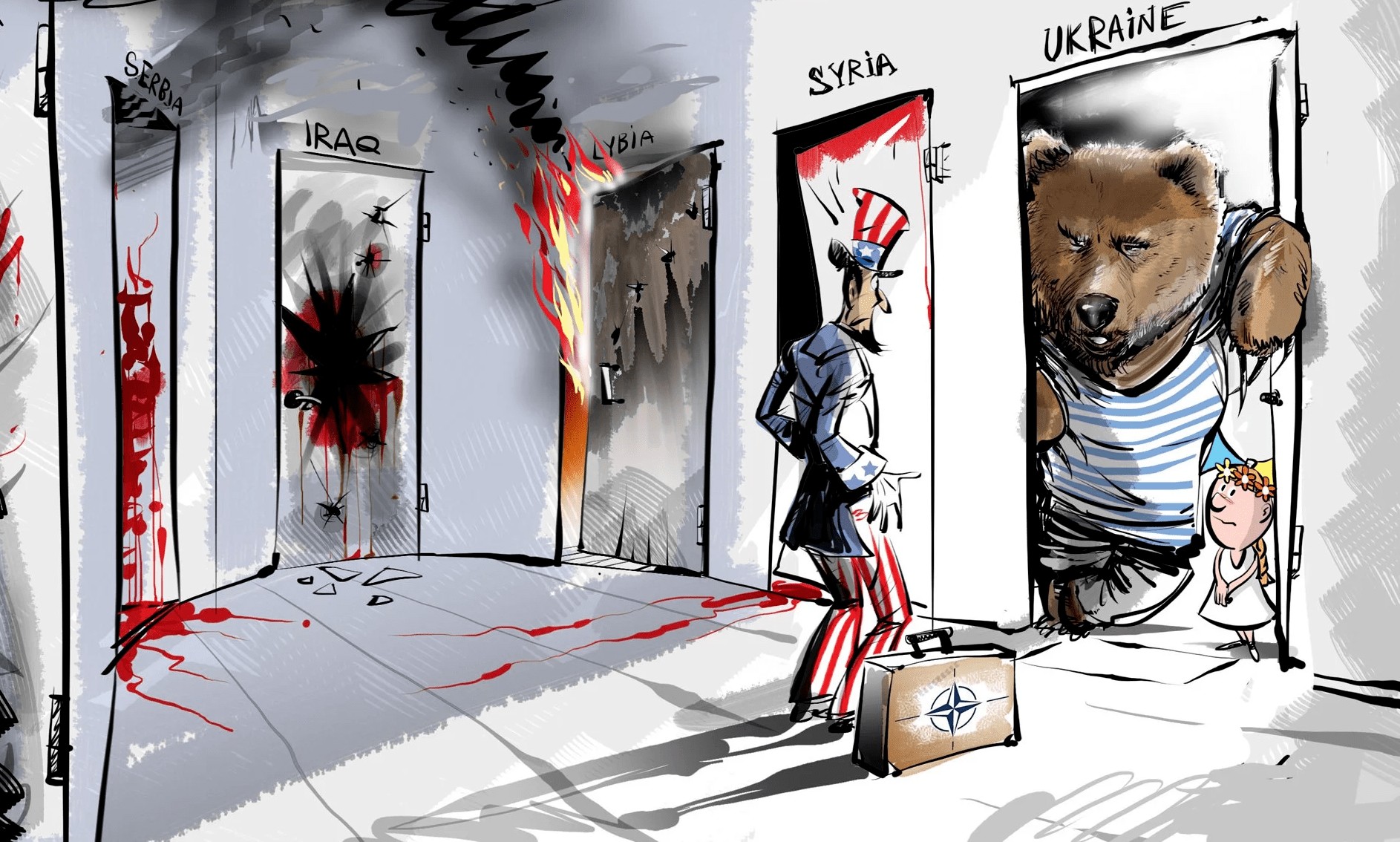 Hello Dear smart boys and girls. We are Russians, Ukrainians, Belorussians and many, many other nationalities will try to bring the truth you thought about but never see on western media.

The God has created people divided by different languages and nations in order to force us stupid creatures to find a way to talk to each other. But some of our “white educated friends” think they are a little bit closer to the God and know how to rule the world. How to combine and divide nations, how to make them happy or punish for not following, or even wipe out from the surface. These “educated friends” call themselves a “progressive world” spreading its “free democracy” upon bombs and rockets killing thousands of people and children, illuminating the entire cities and countries. So, they are gonna bring you “the truth” and “independent view” on whatever event.

So let us introduce to you the most versatile flip-flop minds, the masters of lie and provocations — Ladies and Gentlemen — welcome the United Kingdom and USA in the studio. These evil nests pretend to be the only judge and punisher for the entire planet. They became rich and powerful on the bones of their colonies, on the bones of holocausted American Indians, Africans, Chinese, Europeans, Russians, Japanese and many many others, you can name it… The people who created WWI, gave money to Hitler, raised him, and forwarded to the Russia. The people who made more than 240 invasions throughout the history. The people who dropped two nuclear bombs on already defeated Japan. They call their aggression a liberation and democratisation.

Let’s look closer at their methods of dropping shadow on world events. They call white black, they call own killing a democratic act. They bomb citizens and say “its not us, it’s them”. They create the most radical terrorists, give them money and send to make war where profitable. They try to make conflicts by third-party hands, or better by customisable viruses. If they bomb civilians, they call them terrorists, but if you bomb terrorists, they call them brave civilians. These flip-flop double standards are their signs like a mud on their sandals.

Here we want to ask Europeans, Japanese and Australians. Do you want to live inside those satan valuables? Are you ready to share this path together with UK and USA till the end? Do you think we are not able to create a better world? Do you think American valuables like Coke, Stupid movies and regular wars are the top possible options? Just think and answer these questions for yourself.

Probably you may find yourself in a situation where you want to escape but you can not because you are weak at the face of UKUSA “friends”. The truth is you are strong but wearing an orange glasses makes you weak. You can put it off and look around. You may say you don’t want to fight for your real independence because UK and USA can bring a war to your door. Right, they always do that for someone trying to escape. But what if we say to you that situation has eaten itself and can not continue anymore like this? The time requires from you to make a choice now. We are saying to you that UK and USA evil game is over. You can wake up and stand up.

Regarding the Ukrainian aspect. Believe us we will sort it out without UK snots and USA snivels. And then we push it back to their gardens. We were kind and patient when they bombed Yemen, Libya, Syria, Iraq, Serbia. When they created Usama Ben laden and ISIS. But they don’t understand the polite way, they understand only kicks on their ass. Ok, it’s time do it.

Europe was always being fed by Russophobia against its own worth. The WWI was made in this way, the WWII was also made in this way, and Europeans continue to eat that shit. When will you understand that UK and USA are making money out of the war colliding other countries? 800 bln. military budget is kind of self-explanatory and needs to be utilised yearly.

We have a proposition here — let’s find a new alien threat somewhere on the Saturn and send American and UK troops there to spread democracy over alien’s heads. Let’s substitute Russians by ugly Saturn Aliens? Let Sandy Joe and uncombed Prime-Minister to bash on those aliens, and we all play a strong believe. Bad aliens are much better than bad Russians because they can be as bad as UK wants and as long as USA can dream of.

Our special appeal to European people. Do you remember the times when you were strong and respected in a good way? Do you remember when you used to sing a popular songs on your own languages, making great movies with great heroes? Now you sing localised rap and watch stupid Marvel kitchen heroes in pink pants. What a great progress.

Now you may say we all are trying to build a planetary union speaking one language and sharing same valuables. Sounds great, but don’t you think you are just used with this idea for the simple cheating by your “big friends”? If you look closer there is no any visible movement to this paradise future. They brought a war from your periphery to the center of the Europe. You did not care when they killed people on a distance, but now they are going to kill people inside the Europe as they did in Belgrade with dirty nuclear bombs.

We understand that not all USA and UK citizens share the same ideology as their politicians and oligarchs. The reach bastards are cross-border creatures and require one-by-one treatment. Believe us, we will sort them out like Mossad did with Nazi war criminals. You just need to switch your brains on, open your eyes and make decisions by yourself, not by the pointer of Washington and London. Don’t shoot your legs by closing factories and businesses because you “don’t like Russians”. We don’t believe here your are so stupid to swallow that ancient western propaganda.

Ukraine was always a part of Russia and will continue to be despite screams of pocket BBC and CNN. British Empire sank so low so it scratches the pockets of Russian oligarchs for some pennies. What a shame. These stupid “elite” Brits and Americans show to the entire world that the holy Graal of western civilisation — the private property is not any more guaranteed. Say hallo to Abraham Lincoln. You are at the time of pirates and Ostend company robbing the rest of the world. This is definitely not a progress, and not a progressive society. We clearly see it and we will fix that.

As Regards Russia. We have never wanted somebody’s territories or dreamed of a world domination. We are peaceful, but our armoured train is always at the back track. We know how to fight and survive without food and water closets. Can someone else from “progressive society” do that? Look back carefully to the world history. How many times your predecessors told you not to mess with Russians? A countless times. The Bear is long-patient, but if he wakes up he can finish somewhere on the foggy island or San-Francisco. Do you need that? Did you count all the consequences?

We know Brits very well. British anti-God sneaky politicians ruled by the Queen, which is absolute blasphemy, are bathing with bloody lie. People who are trained to flip and change their minds on the fly since childhood. Russia is their target for the last 400 years. They want to play us a role of world threat to keep capitalism running. They want us to play a Stalin and iron curtain game once again to clash with Europe and “utilise” as many our brothers as possible. So called cold-confrontation on the price of middle class to be robbed and killed. You afraid Putin and pay more for the security, thus, trying to run the obsolete engine of capitalism once again. Are you sure it goes this time through the same path again? Didn’t you forget to consider the God’s interests about Russians? Aren’t you afraid of bifurcation points? Think seventeen times. The feedback can be mind-blowing.

Current situation shows West completely not understanding East, its power and the sources of this power. Russians always wait long but act sudden and overwhelming without western-type advertising polishing. It is hard to cope with and manage afterwards.

Do we afraid of nuclear war? If it is about evil and good, then hardly. We are in conjunction with our muslim brothers — if the total balance between good and evil is violated then we need to step in at whatever cost, otherwise our lives have no any sense. We don’t want our children to be a hidden UKUSA raw colony, omni-gender, fucking tolerant or family-free. No way. Here is the red line and our standing point.