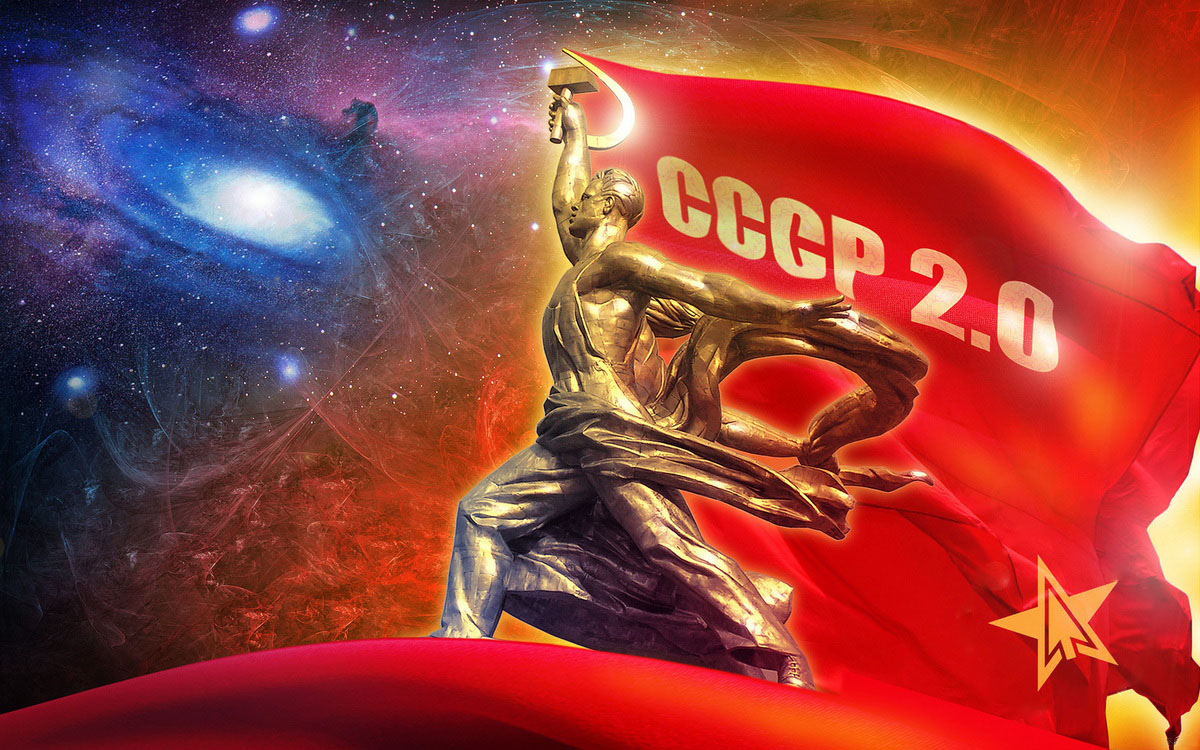 Hi, Dear subscribers and haters. Being born and settled in Mother Russia we are open to any human beings from all over the world interested in better knowing our remarkable Country, its economy, and trade. We feel nowadays we can fix the trend of significant change caused by modern streams starting from millennial’s torpor and ending with geopolitical repartitioning. Let’s see where we are heading and where “highly likely” will be.

When I was young and naive I thought I am living in the country, that emerged in ancient times and intended to be always the same. But growing up, you understand there are historical and economic cycles, technological and ideological cycles, political leaders life cycles, and much more. Observing from satellite orbit, you perceive everything is more like a project than an eternal state. Looking closer, you see capitalism and communism like a project, USSR and USA as a big project, west and east confrontation, ecological theme, local wars, biological terror, and so on. Someone is creating the agenda and pushing it into reality. Finally, we came to the stage when what you see is not what you get. It means the most demanded skill today is not to believe in “official versions”. So, having this right set in mind, let move to the economy and future trends.

“Have to do something with Big China” is the most dominant trend in future shaping. The world economy is not ready for every Chinese citizen to become “a little bit reacher”. This can cause sudden shortages of milk, transport containers, wheat, ships, and other things. So, it is decided to “do something with China”. For Big Brother to fully engage with China without any interruptions for “smaller friends” it is decided that smaller friends will stay quiet until the job is done. China decided to make its first counter-strike with crypto-currency suppression aiming abroad profit centers. This battle has just begun. The interesting thing with China is its size, but very hypothetical power. Nobody saw China won any military or economic conflict throughout its history, but everyone knows how Brits jeered at China with opium wars and Japan invasions. Every Capitol Hawk is keen to see China somewhere in a local military incident before those guys land on the moon and see no “American traces”. The Chinese space program is the last border-line crossing and there is no time anymore to wait.

What does it mean for the Russian economy? The target is to keep Kremlin low as stable as possible until China is set. It means more sanctions, more expensive dollars and euro, economic activity retardation and local officials assault on people. All Russian economy assets are spread across several oligarchs sitting in London or Miami holding major actives outside the country. In the time of overall political suppression, they start to tremble and do stupid things like talking too much with US officials hoping to book a quiet harbour for pension. Hanging between American regulators and Russian KGB successors they can be bankrupted in one finger move by either side. Many of them do not understand this double wiring having no good education and brains. A good or bad example is the case of Boris Berezovsky. Being played by both sides till zeroing he finally had to change credentials and settle in South America as many Nazies did.

All Russian big industries including retailers are registered and profit held abroad. Any wrong move and all that assets stay where they are forever. Russian people get only stores in obsolete Khruschevkas and sandwich-panel hypermarkets. Any wrong move and credit card circulation will be shut down. To avoid explaining such huge risks to the crowd it will be obscured by a revival of USSR 2.0. It will be said – “Look how bad are corrupted officials and oligarchs, who keep money and children abroad. People want an order, social justice and a great country to believe”. We see first signals for this underground movement in the form of officials start to play more power, creating their own local and regional rules, entering the area of federal regulations. Luckily, COVID-19 is to the help. While dealing with the China case Russian government officials are allowed to play British gentlemen waiting to be approved “in da Klub”. The same trick played with late Soviet nomenclature and Misha Gorbachev. Nothing personal, project management is project management. Looks funny and kindergardish, but all bifurcation points look the same simple.

Another modern challenge – Millenilal’s dullness. Has already entering key sectors and positions in Russian business. Though this is a worldwide factor, in Russia it combines with education ruined in the 90-s. High-grade specialists who received a good education in USSR times are going to retire and be replaced by “smiling people” able to “wish a good day”. These blank-fired rookies are going to nuclear power plants, chemical industries, medical surgery, plane pilots, architects, construct builders without talking about ordinary trade. Why do you need terrorists having such an active asset at your depository? In upcoming years soviet-build infrastructure ends-up in expiry period and these people have to handle that. We will see.

The Russian economy is already a prepayment economy. Working capital has left small and medium sectors. You can not buy or order expensive goods and services (like 1K bucks) without advance payment. In 30% cases, you will see no goods, nor services, and nor counterparts you paid to. This number is rapidly growing. Every consumer and prosumer service sector quickly becomes an entrepreneur-like small business leaving big chunks of profit only to state-budgeted contracts. If you analyse SOHO-sector contracts you find 50% deals with no any kind of paper contract. Other 50% missing the subject description, obligations, deadlines and specifications. Thus, the economy works on verbal trust.

Russian retail in specific is highly dependent on oligarch moves described above. If the iron curtain start to descend and they are welcome in the western world, they sell all assets here and move their focus abroad. But, if the welcome is not an option, they put their focus inside the country and start to buy competitors to minimise profit threats. We already see such purchasing behaviour. Have to say all Russian oligarchs are divided into two parts. Those who are more-less successfully incorporated into international business, and those who sit on a pipe (gas, oil, steel). The second group has no option to be incorporated abroad because their assets are anchored in Russia with the fragile supervision of Siloviki (half-criminal half-official militia-type). You can temporarily spend your billion salaries like Abramovich, live in London and throw money on yachts, but believe us, D-Day to pay the final bill will come. This second major group of “respected businessmen” is not more than a risky gasket for the entire economy. If what, they jerk off to any country accepting a private jet.

This duality in oligarchs deployment explains fluctuations in the Russian market. No stability for them – no stability for the market. Two main competitors Magnit and X5 Retail Group continue fighting for leadership. For both, this battle is vitally important. Magnit is a young state company with hired ex-pats looking good and shiny. X5 Retail Group is the last stand of smart-oligarch Mikhail Freedman, who will give up only as the last one. Having got a victory Magnit opens broad perspectives for state officials to speculate on the subject “State is more effective than Commercials”. In the right hands, this formula can build a direct road to USSR 2.0 and a lightly-planned economy. Maybe for you, it is bad, but for power beneficiaries who need silently disappear with the money, leaving a good idea to be busy with, without possible future investigations is very good.

Ban on internet and Visa?

Chinese model or Belorussian one?

Socialism with a human face or Communism with smart entrepreneurs?

Our team thinks towards soft velvet curtain, not an iron one. Those who visited China can remember the internet opening 1 page for 1-3 minutes until Siloviki went through your loading traffic. Not bad compared to the complete Internet ban. For the positive Millennials who believe in decentralised Internet, we can mention all optical cables are running into any country through the exact physical hubs. One day comes a guy with shoulder-straps and switches the plug off. We think this scenario will be avoided but traffic retardation is quite possible accompanying by massive internet-resources blocking.

We don’t believe Visa service run-down is an option. There are too high risks of unwanted revolutionary movements in the nuclear-weapon country. Nobody excepts that.

We think presidential power will be spread across local officials trying to make small kingdoms pumping their local rights.

Market assets continue to consolidate, but not because we still have a big gap to America as some stupid consultants think, but because mentioned oligarchs factor. Please, forget about a free market, democracy and self-market regulations. Maybe it works when you buy socks in a shop, but not when you buy a Top10 company in your industry sector. Please, be wise boys, take off these noodles from your ears. Try to open a petrol/gas station in America. You will see the free market at its best.

As we see, no any sharp movements we used to experience before will be applied, but there is an even more dangerous and hidden challenge than that. We see it from internationally used instruments like COVID stuff. Its dastard, humiliative, obliterative lie in its most perversive temper. Unfortunately, modern warfare is like that. The good thing is it’s working slow and hitting only weak spirits, those who believe in what they hear. It is constructed in a way to human self-destruct. You are contagious, you are a danger, direct contact is danger, stay at home and die without income, disappear and vanish. Enemies are not rolling anymore on tanks. They implant mindsets and implode from the inside. Your enemy now is a bodyguard at a supermarket, your colleagues at work, your city government, those who think you might be contagious and dangerous by any means: not wearing a mask, not vaccinated, not having a bar-code on your wrist, not believing in .… you remember. We have no choice anymore. No more guns, if you have a vaccine. The thing you can’t check by disassembling or by taste. You are obliged to intake or suffer from self-arrest. Our civilisation has never felt so far, but we hope people who invented this approach will not live a reasonable time. Every human project has its human master, and the human master is mortal, just as his human project. This is God’s bypass.

involved@top-retail.net – scratching the surface of essence